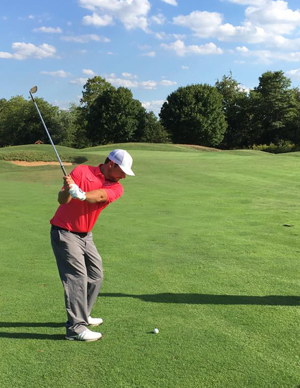 Project 130 is a wedging system under the performance-coaching category of the Raspberry Golf Academy. The term wedging refers to shots from about 60 yards up to about 130 yards, of course depending on age and skill level. Similar to the No Brainer short game program, Project 130 is built around the idea that natural swings will produce a consistent distance that can be tested and measured. This program is called Project 130 because it extends out to about 130 yards.

The most important part of the program is that we are measuring natural swings, meaning each player will produce unique trajectories and unique distances, but everyone will finish the program with three reliable distances with each wedge. Because these are natural swings, they are easy to repeat and to trust under pressure. Whether you take the Project 130 group class or learn it individually, you will be trained on how to properly produce three different trajectories, leading to three different distances.

Here is an example of the finished product; remember the numbers on the chart are just carry numbers. Notice some of the numbers are similar or overlap. By working alongside your coach, you can determine a process for picking the correct shot in various circumstances.