With the lofty goal of shooting her age in the back of her mind, Raspberry Golf Academy student Susan Firth dropped a lengthy birdie putt from off the green on the 18th hole at Brambleton Golf Club to fire a 78, which just so happens to be her age.

The England native has been playing golf since she was in her 20s but took a long break in the middle part of her life. She made the return to the game and began taking lessons from instructor Lisa Deel at Raspberry Falls Golf and Hunt Club about five years to prove to herself that she could still get better at any age. She has improved from a 15 handicap to an 11 and is trending down currently.

It was on Tuesday, Oct. 25, that Susan knocked in that birdie putt to match her age of 78, despite shooting a 42 on the front nine. It was certainly a clutch back nine performance to not only match her age, but to shoot her career low round.

“I thought if I made par on 18 I would shoot 79, and that would be okay,” Susan said, “but luckily I birdied 18 from putting in from off the green, so that was quite a surprise and a very pleasant one.”

Riding the confidence from that round, she improved her career low by three shots as she fired a 75 on Thursday, Nov. 3, also at Brambleton. After a 37 on the front, she overcame a double bogey on the 10th hole to shoot 38 on the back. She finished her round with a six-foot par putt on the par-5 18th.

“I was hitting the ball really well and I was putting really well,” Susan said. “After the double I came back and had a string of pars, and then on the last hole I had a poor drive, but I was just short of the green in three and I chipped on six feet from the pin and made the putt for par.”

This level of success did not come out of nowhere, however, as she recently won the 2015 and 2016 club championships at Brambleton.

According to Lisa, Susan is a very positive person who does a good job sending email updates about her progress and always believes there is more room for improvement.

“I think it is a great accomplishment, but I wasn’t surprised, she is a great competitor, always with a positive attitude,” Lisa said. 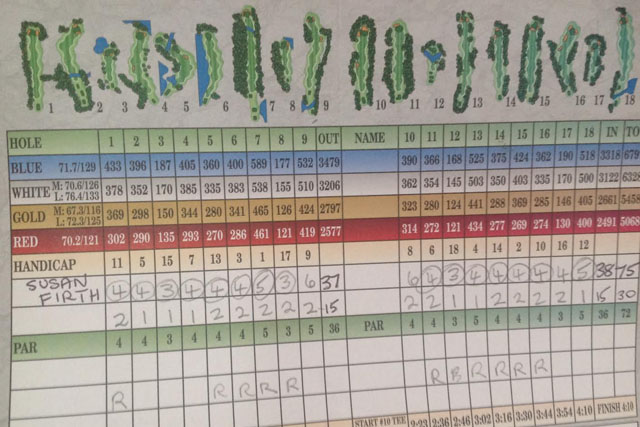